from the earth’s geothermal resources into electrical energy.  The fluids are recovered in the
process and re-injected back into the earth. The following YouTube video from CalEnergy provides a good overview of how a typical geothermal plant works.  California currently obtains about 4.5% of its electricity from geothermal plants. Most of these plants are sized at 50 MW but some plants can be larger in the 150MW range.  There is an estimated 2,300 megawatts of undeveloped energy in an area in Imperial County California near the Salton Sea just outside of San Diego. 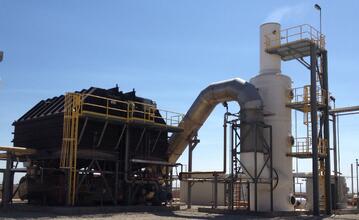 The geothermal energy conversion process generates a sulfur containing off-gas which passes through a thermal oxidizer to destroy volatile organic compounds (VOC’s).   The sulfur compounds are oxidized to sulfur dioxide (SO2) and must be removed before exhausting to atmosphere.  A packed bed absorber treats the thermal oxidizer exhaust to remove SO2.  Often times geothermal plants are located in an extreme desert environment with summer  temperatures reaching > 120oF.  The scrubber equipment must be designed to achieve high removal efficiency, continuous operation and withstand the extreme environment.

Click the link below to download a case study for an SO2 scrubber installed at an ORMAT geothermal plant near the Salton Sea in Southern California.