Concern for global climate change coupled with high oil prices has generated new interest in renewable energy sources.  One of these sources is waste to energy using gasification.  Gasification is a thermal destruction process which produces synthetic gas (syngas) as an end-result.  In one form, the syngas is then used as fuel in an internal combustion engine (ICE) to drive a generator, producing electricity.  Waste heat is recovered from the system to improve the overall plant efficiency.

During gasification, various pollutants may be produced depending on the make-up of the waste feedstock. The feedstock can vary by plant from biomass, municipal solid waste (MSW), or even hazardous waste.  The pollutants involved with these processes include sub-micron particulate matter, tars, ammonia, metals, dioxins and furans, and acid gases.  One of the primary challenges is cleaning the pollutants in the syngas to a level that is tolerated by the ICE.  There are many innovative companies working to commercialize waste-to-energy production using gasification.  Each application is unique and depends on the type of gasification process and feedstock material.  We've seen two general approaches regarding syngas cleaning: 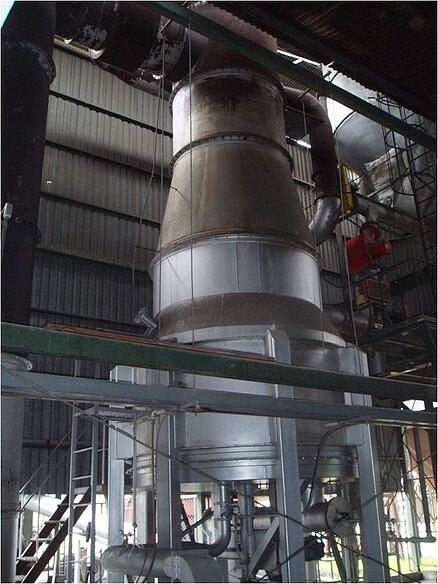 Thermal Tar Destruction - In this approach, the syngas passes out of the gasifier and through thermal process that destroys the tars at a high temperature.   This greatly simplifies the gas clean-up as it eliminates the need for a tar removal clean-up system.  The trade-off, however, is a lower energy content of the syngas.  The gas clean-up can be achieved with proven, reliable scrubbing technologies, similar to systems that have been used in conventional incineration scrubbing systems.

Tar Removal Scrubber - The tar removal scrubber approach has a lower outlet temperature and a higher energy content, but it contains tars that are more difficult to remove.  The main challenge of tar removal relates to the fouling that can occur in the initial stages of condensing and collecting the tars.  The source of the challenge is the formation of "tar balls" which are long-chained hydrocarbons that have a tendency to agglomerate and stick together, fouling equipment.  Tar removal processes also produce liquid wastes with higher organic compound concentrations, which increases the complexity of water treatment.

Although more complex, these problems can be overcome.  Envitech has developed a second generation syngas tar removal system that uses a clean liquid stream for condensing and collecting tars. The system utilizes an arrangement of conventional process equipment for solids/oil water separation that results in a clean discharge stream and return liquid to the scrubber. By returning a clean liquid stream to the cooling circuit and condensing section, problems associated with tar ball fouling is eliminated. In addition, the process mitigates the impact of organics in the liquid discharge.

In a future blog post I will discuss considerations involved with selecting a wet electrostatic precipitator versus a Venturi scrubber for particulate control for syngas cleaning systems.

Click on the icon below to download a white paper written about gasification emissions using wet scrubber technologies.