In 2009 I gave a paper at International Conference on Thermal Treatment Technologies (IT3) on a wet electrostatic precipitator (WESP) system for the Quemetco secondary lead smelting facility in Southern California.  It was explained that the system was an add-on control to help the plant meet a cancer risk index by removing low concentrations of metals.  The facility was meeting stack emission limits and had similar control technology used by other facilities in the industry including bag-houses, 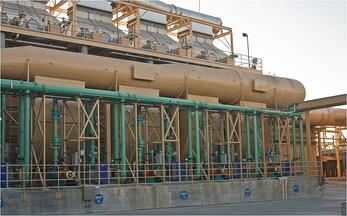 HEPA filters, and wet scrubbers. Because residential neighborhoods had moved closer to the boundaries of the plant over the years, the stack emission limits were insufficient to meet the cancer risk index.  In other words, the facility had to achieve lower emission levels than other similar plants. The WESP system was installed in 2007 and provided a performance guarantee for arsenic, lead, and nickel which were the larger contributors to the cancer risk index.

In May 2011, the EPA released the new National Emissions Standards for Hazardous Air Pollutants (NESHAP) for secondary lead smelting facilities.  The report sites in section III.B.2 that two of the 14 secondary lead smelting facilities have estimated actual lead emission only moderately lower than the allowable emission level (about 2-3 time lower).  The majority of the other facilities have estimated actual emissions in the range of 10 to 100 times lower than allowable.  However, one facility with highly advanced controls has an estimated actual emission of about 1,500 times below allowable emission levels. This facility is the Quemetco facility operating with a WESP system.  It can be surmised the plant is achieving emission levels 15 to 150 times lower than the other lead smelting facilities.

In June of 2010 a public letter on behalf of RSR Corporation (Quemetco) was presented to Mr. Charles French, Metals and Minerals Group, of the EPA. The letter states that the WESP system yielded dramatic reductions in air emissions from its operations.  The cancer risk was reduced by 87% to 2.88 cancer cases in one million exposed individuals over a 70-year evaluation period.  Prior to installation of the WESP, Quemetco emitted 615 pound of lead annually.  The letter reports that lead emissions plummeted to 1.22 pounds per year – a 99.8 percent reduction.  A table is provided in the letter that summarizes significant reductions of other hazardous air pollutants. Some of the reported metals reductions include the following:

The data presented in the letter is consistent with the initial stack test data that was shared with Envitech following the installation.  Although the system provided a guarantee for only three metal compounds, we expected similar removal for any condensed metal at the inlet of the WESP.  The data demonstrates this was the case.

The consistent performance since the installation in 2007 demonstrates the tremendous capability of the WESP system to achieve dramatic reductions of condensed metals in a robust fashion for a process that must operate 24/7/365 days per year.

For a copy of the full paper, please download the white paper below.