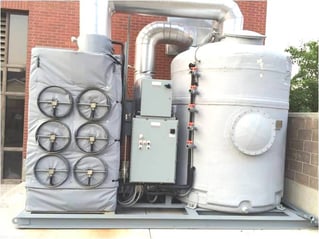 In 2009, the US EPA revised the emission limits for the Hospital, Medical, and Infectious Waste Incinerator (HMIWI) MACT standard. You can follow the link to the blog piece published in May 2013 on the new standard. It dramatically reduced the emission limits for several pollutants including particulate (PM), lead (Pb), and dioxins and furans (D/F). Several existing medical waste incinerators in operation at the time were not capable of meeting the new limits, especially for lead (Pb) and/or dioxin and furans (D/F). Cost effective add-on controls were needed to bring existing system into compliance with the new rules and to allow them to continue to operate.

To meet this new challenge, Envitech designed a carbon bed adsorber and filter package to be installed downstream of existing wet scrubbers. The package is comprised of a new fan to overcome additional system pressure drop. Heat of compression from the fan and a re-heater duct heats the wet gas above the dew point to prevent condensation fouling in downstream filter and/or carbon bed adsorber. The system is delivered pre-assembled on a skid to reduce installation time and cost. A cartridge filter removes low concentrations of condensed Pb particulate. The carbon bed adsorber removes dioxins, furans and mercury (Hg). Envitech has upgraded four medical waste incinerators to meet the new MACT standards. All four are operational and compliant with the new standards.

In one case for Wyoming Medical Center (WMC), space was limited for add-on controls. The system had to be installed outdoors and capable of withstanding below freezing temperatures. The existing system did not meet the new limits for lead (Pb) and dioxins/furnace (D/F).The add-on controls included a cartridge filter and a carbon bed adsorber. The equipment was insulated and heat traced to maintain temperature above the dew point after re-heat. System features include:

The system has been operational since 2014 and has been used on a routine basis during cold winter months.   The system comfortably passed a stack test in 2015. Compliance for lead (Pd) is 20 times below the limit and Dioxins/Furans (D/F) is 5 times below the limit. The re-heat and filter package has been used on several other medical waste incinerators and provide a cost effective solution for meeting stringent emission limits.