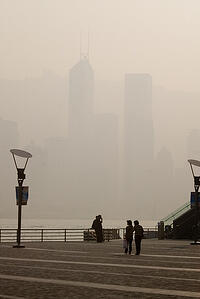 The primary products of synthetic gas (syngas) production from biomass are hydrogen gas, carbon monoxide, and methane.  Unfortunately, those are not the only compounds formed.  Other compounds form depending on the elemental chemistry of the biomass.  One of the more common byproducts is ammonia, released from organically-bound nitrogen.

Why ammonia rather than NOx

Organically-bound nitrogen converts to ammonia, rather than NOx, in a gasifier.   Gasifiers are typically oxygen-starved environments.  Conversion of organic nitrogen to NOx requires oxygen.  Without oxygen, combustion thermodynamics favor the production ammonia.  In fact, ultra-rich combustion environments produce reduced compounds, like ammonia, rather than oxidized compounds.

Why it is still NOx

The main goal in the production of syngas is to eventually burn it!  Ammonia left in the syngas WILL convert to NOx in a rich combustion environment, like an internal combustion engine or a syngas-fired boiler.  NOx is a heavily controlled environmental pollutant and it is important to minimize its production.

How do I remove it

Envitech's experience with ammonia scrubbing spreads into other industries.  Please read our white paper on the reduction of ammonia emissions for a sludge dryer.